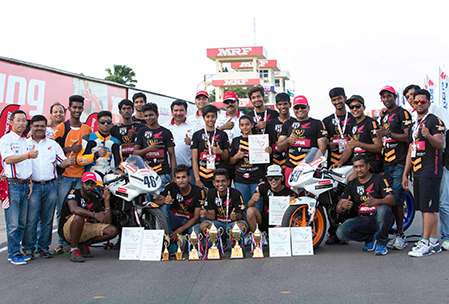 Hari & Rajiv Score 1, 2 in 165 Pro-Stock Class continuing the dominance of Honda in the category.

The race weekend which started off under the clouds and on the new surface of MMRT, Sriperambadur got hotter as it proceeded towards race day. The new track asphalt at MMRT made the riders a little tentative about their braking and throttle during the initial Thursday and Friday practice but as the intensity of the weekend increased all was forgotten and it was race on.

Being the 2015 reigning champions of the Pro-Stock category, Honda Ten10 Racing Team continued it dominance in the class with 1-2 finish by Hari Krishnan #33 and ‘Raven’ Rajiv Sethu #8 respectively. In a combined grid of 300-390 and 165 Super Sport, the Pro-Stock riders stood out with a blistering best lap of 2.05.044

The premier Super Sport India class dominated by top teams in India suffered the most in adapting to the new surface as their lap times increased to .58s and sometimes under 2 minutes as compared to earlier lap times. Despite that this race continued to be one of the most exciting races with the big wigs fighting for the top spot.

We continued our development with HMSI and HRID and have made some great progress as compared to Round 1 and Sarath Kumar #69 managed stay with the lead pack and was placed second in the last lap of Race 2, however a brake failure made him give up his position to finish in a safe fourth. Mathana Kumar improved his lap time to get a better feel of his new setup of the Honda CBR150R.

Now with a two week break it’s crucial for the team to progress further and put the Honda CBR150 on the top spot of the podium in the Super Sport class.

Ramji Govindarajan, Managing Director, Ten10 Racing: “We have great support from HMSI and HRID who have built us two fabulous CBR150Rs for the Super Sport class and we are confident of the development and progress and it won’t be long before we are on the top of the podium but there is still a lot of hard work to be put it before we get there.

With the support of our sponsors Mr. John Sudheer & WOW Digit who are standing by us for the development of this little know sport and our lubricant partner Motul who have played a key role in the development and performance of the Honda CBR150s especially in the extreme working conditions we are sure to give a tough fight to our competitors in the rounds to come.”