TOP 10 FINISH DESPITE TECHNICAL PROBLEMS IS A SATISFYING RESULT 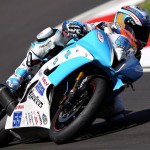 The race day forecast showed an unusual situation for the first weekend of April: fog, temperature of 9 degrees and possibility of rain.Â Hard to choose the right tires & setup but thatâ€™s the beauty of racing. Although a great start from second row to the fifth position, Massimo Roccoli was struck by technical problems that forced him to reduce the pace and lose several positions.

A rough race, the pilot Romagna still managed to bring home the bike and retain his ninth position.Â A real shame because today, with a little luck the expected result was far more ambitious.Â The track was still tricky for many drivers especially towards the end.Â And this is a difficult part, resulted in penalties to several pilots, and also a black flag both Sofuoglu.Â Luck is what it is not even a Christian Erbacci, who was also plagued by problems of chattering and missed the points

Massimo Roccoli # 55: I had a good start but then had e problems at the problems at the end of the first lap and could I not break normally.Â Too bad because the engine drove strong and I could have got a better result.

Cristiano Erbacci # 81: In the warm up the bike behaved unlike yesterday, perhaps because of weather conditions.Â The engine went really well but I had problems with chatter and decomposed under braking.Â What I regret is having missed the points for a breath … ”

Team Manager of the Bike Service WTR Ten10 : Â “I am very pleased with the way he worked the team and the performance of the bike that is at a good level of development.Â Too bad for unexpected technical problems that have prevented us from obtaining a prestigious result that was within our reach today.