THE TRENDSETTERS ARE BACK! MUSLI POWER-TEN10 RACING UNVEILS RIDERS LINE UP. 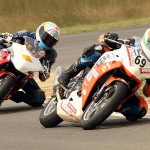 Ten10 Racing India’s first MotoGP and WSS team are back in the National Motorcycle Racing Championships. The 2010 championship winning team that changed the pace of Indian motorcycle racing will field four Yamaha R15s in the new Group C 165CC class which a mix of experienced and young upcoming talent.

The team has a roped in Kunnath Pharmaceuticals as their title sponsor for the 2012 season and the team will be called Musli Power “Ten10 Racing. Musli Power who were involved in Formula 1600 cars in 2011 and currently involved in Indian National Car Rally Championship (INRC) 2012,have come forward to support two wheeler racing in India which is gaining popularity in India.

Indian National Motorcycle Racing Champion organized by MMRC & FMSCI is conducted to determine the National Champions in the two wheeler racing circuit. The Championship has churned out some of the best champions from India who have gone on to participate in the international championships – Sarath Kumar (India’s first MotoGP rider & Italian Championship race winner), Rajini Krishnan (Asia Road Racing winner), Preetham Dev Mosses and Dilip Rogers to name a few. This year the Championship will be conducted in Coimbatore for the opening round and four remaining rounds in Chennai “MMRT.

Ramji Govindarajan” Team Owner: We are happy to announce our participation in the 2012 INMRC. It is always good to be back and participate in the National Championship and is also important to support young and deserving talents. We are happy to announce our partnership with Kunnath Pharamceuticals as our title sponsors; the team will be called Musli Power Ten10 Racing. It is important to bring brands into motorsports, as it is a fast growing sport among youngsters in India and provides a great platform for brands to expose themselves. Musli Power as a product is positive – it promises high energy levels, lowers heart rate and also reduces fatigue which is very important for people involved in high performance sports such as ours.

We have the right mix of riders in our team this year backed by a very innovative and experienced technical staff to build the right championship package.

K. C. Abraham “ Managing Director, Kunnath Pharamceuticals: œWe are happy to partner with Ten10 Racing this year in the two Wheeler National Championships. Supporting sports and games has been a tradition with the company, not for any return but as our Corporate Social Responsibility policy. We have been associated with motorsports for a year now and we have noticed that motorcycle racing is a growing sport in India and is followed by the younger generation. We believe Musli Power is a perfect fit as brand in motorcycle racing as the riders involved in the sport require a lot of stamina and energy during the race which is a synonym of our product. Musli Power is an ideal sports medicine because it contains herbal stimulants and is devoid of any harmful or banned synthetic steroids.

Vinoth Kanan: I am really delighted to be a part of Ten10 Racing for 2012. The team has a legacy and has experiences in the International Champions such as MotoGP and WSBK. Personally after having won four National Championships I want to win my fifth championship with Ten10 Racing and I am sure together we will be able to perform and achieve the mutual goal. I thank Mr. Ramji Govindarajan for giving me this opportunity.

Arjun EB: It is an honour for me once again to continue with Ten10 Racing in 2012. I have worked with the team for two seasons now and I venture into the higher class of racing in Group C 165CC. I thank Mr. Ramji Govindarajan for this opportunity and I am confident about a good result this year.

S Madan: It was a difficult but a satisfying year for me in 2011, I managed to win the Championship after many obstacles as a privateer. My dream is to ride in a professional team and that has come true for the 2012 season. I have many things to learn and with Ten10 Racing’s experience I am confident that I am in good hands for this season to perform.

Sudhakar M: I was a part of Ten10 Racing in 2010 and I really enjoyed the season although I missed out on the Championship due to bad luck and many crashes. I am happy to be back in the team for the new season and move up in the Class. We have a good working relationship and I am confident that we will have a winning season together.

Ten10 Racing is a competitive motorcycle racing team based in Bangalore, India. It was founded and is headed by Ramji Govindarajan since three years now. Ten10 Racing is working towards establishing itself as a business in Motorsport; an upcoming sport in India and Asia.

Ten10 Racing was the first non-factory team from India to participate in the MotoGP 125CC World Championships with young rider Sarath Kumar. This year they are competing in World Super Sport and in the Group C “165cc” Indian bike category in the Indian National Motorcycle Racing Championship and the Malaysian Super Series. Ten10 Racing (I) Pvt. Ltd. aims to introduce new talent and support them while striving to achieve success in motorsports, both as a business and as a dedicated race team. Ten10 Racing will be called Musli Power Ten10 Racing for the 2012 season in India.