The Battle of Brotherhood, A Championship to Remember 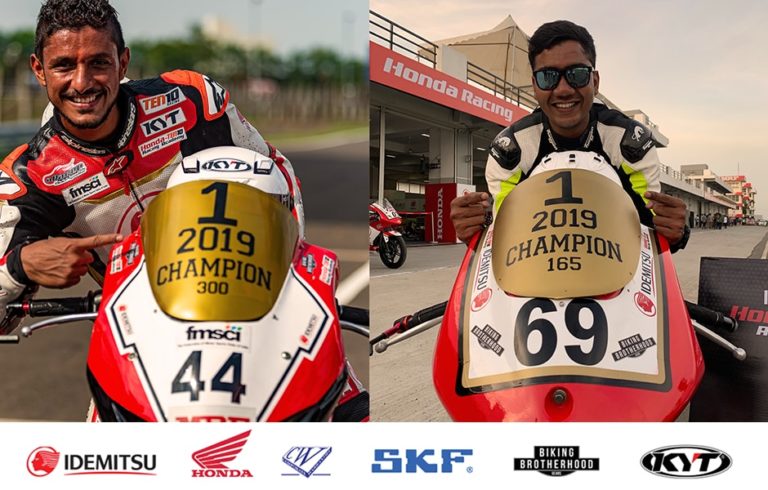 The team started preparations for the final round of Indian National Motorcycle Racing Championship with great confidence. With Rajiv Sethu #80 in a comfortable Championship lead followed by Sarath Kumar #69 in the Pro Stock 165 class the scene was set for a sensible finish to clinch the Championship. While in the Pro Stock 300 class, Anish Shetty #44 sat on top of the points table comfortably to win the title followed by his team mates Abhishek Vasudev #36 and Aravind B #13 who were still in contention for the Championship with the new ‘Double Point’ rule in store for the final round – i.e. 50 points a race for the winner  – a total of 100 points to fight for. Any lead that we had looked negligible.

Rajiv & Sarath, both in aggressive frames of mind, knew the battle would come down between them. Race 1 saw a brilliant start by all Honda Ten10 Racing racers who were swarming the lonely competitor by the end of the first lap. Kevin Kannan #07 was a surprise package who took the fight to Jagan with Sarath and Rajiv trailing in third and fifth place reserving their attack for a Championship battle towards the end of the race. In lap 4, Sarath took over the lead from Jagan and Kannan, but the turn of events began at the end of the penultimate lap with the riders entering the final lap.

A crash in the last turn involving one of the competitors in seventh place brought out the red flag just when Rajiv was about his to launch his decisive move to take over the lead and win the race. Unfortunately as per the regulations, the race results were declared as per the crossing order in the fourth lap (1 lap prior).

This changed the fortune of events in the Championship standings. Sarath was leading at the end of the fourth lap and hence was declared the winner of the Race 1, and Rajiv Sethu the Championship leader who launched his podium attack just before the red flag ended up in fifth position and relegated to second position in the Championship, setting up the finale between the team mates.

Sunday morning was set for the final race of the season with the battle for the Championship between the teammates. Finishing the race was a must for both the riders, but most importantly ahead of each other to get their hands on the title. The morning heat of Chennai saw some tense moments in the pit and starting grid. With both the bikes experiencing glitches it looked like the chances were not with the riders anymore. While the battle for the race victory commenced once again between our surprise package Kevin Kannan and Jagan Kumar of TVS Racing, the real fight for the Championship was getting sidelined with Rajiv suffering the worst of glitches from the start and ending up in sixth position while Sarath placed and finished in third place to win the second National Championship of his career after a gap of 9 years. Rajiv Sethu who lead the Championship from Round 2 to the penultimate round had to settle for runner up position.

In the PS 300 class, Anish Shetty who had been dominating with five consecutive victories to has keep him on the top of the points table with his competitive team mate Abhishek Vasudev keeping him on his heel at the second place. But Anish’s sheer confidence in this season saw him winning both races of the final round to win the Championship in style ahead of Abhishek Vasudev and Aravind B making it 1, 2, & 3 in Championship for Idemitsu Honda Ten10 Racing.

The competition was tough and the battles were close and many were decided in the last lap. But finally 1 & 2 result in Championship for PS165 category for a fifth consecutive time and 1, 2 & 3 in the inaugural PS300 category can only mean one thing  – This Victory is Sweet!

This result wouldn’t have been possible without the support of our sponsors who share the same passion of success as us. Thank you Honda Motorcycle & Scooter India Pvt Ltd, Idemitsu Lubricants India, Corporate Warranties, SKF Bearings, KYT Helmets, Brotherhood Biking Gears, Planetsurf Creations and Proathlix for all your support.