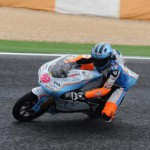 The cloudy sky over Estoril has not left us but fortunately rain did not fall in none of the 125cc free practice sessions. In the early morning free practice the track was wet, but little by little it became almost dry at all for the qualifying practice. However there were some dangerous wet spots on the track that caused several crashes.

The so-long awaited time has come and finally, for the first time, people will get to see Sarath, the Indian rider, aligned on the starting grid to proudly represent his country – India, an extremely important emerging country.

Sarath has been the star of a fantastic morning free practice session on the wet, keeping improving lap by lap until fitting in the notorious 107% cut-off rule, with a margin of 1.5 seconds on the qualifying time limit. This achievement marks a special moment in his career because he is proving to be fast both in learning and in adapting to new conditions. Hence soon he will be close to reach the next stage, that is to not only be merely able to get qualified but to keep pace with the other riders, more experienced than him, and aiming at the scoring area.

Francesco will start from the 10th row on the grid, ahead the Indian team-mate. The young “Chicco’s, lovingly nicknamed so, continued keeping up the good work done yesterday. In the free practice, he confidently lapped on the wet track. Unfortunately the qualifying practice was not as good as expected but anyway it still helped in collecting important data for the dry set-up.

Francesco Mauriello, 1’53.740, 29th:
“It’s not been one of my best days. The morning free practice was good because we managed to find a better set-up for wet, getting more feeling. Plus I feel well on the wet. However there still is a long way to run and work to do, as the qualifying was not so good. I got qualified within the qualifying time limit rule for just a few milliseconds but at least I made it and I’m in. Tomorrow I’ll try my best hoping to perform well.”

Sarath Kumar, 1’55.530, 31st:
“I’m very happy because this morning, although it was only the free practice, I managed to fit in the 107% rule and it’s the first time that happened since the beginning of my venture in the world championship. For me this is like I made it in the official qualifying! Anyway, I did hope to perform a good qualifying practice, I was feeling very confident. But at only two laps from the start, I was entering the corner at fast speed when I slipped on a wet patch on the track surface, causing a bad crash. My team worked very hard to fix the bike the fastest possible. They have been fantastic because I got back on track shortly; I tried to push to the limit to get qualified. When the practice was over, I thought I didn’t make it….when a wonderful news hit me: all the three riders that missed the 107% cut-off were admitted to enter the starting grid. So tomorrow, I too will be able to take part in my first race of the world championship and my heart is filled up with joy!”