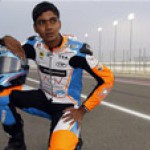 Sarath lifted the championship trophy and celebrated a very successful year at the Indian motorcycle races.

Sarath Kumar, India’s first MotoGP Rider, wins the Indian National Motorcycle Racing Championship (INMRC) 2010. The final round of the Sidvin-INMRC race was thwarted by rain and yet that didn’t dampen the spirit of the participants and engineers present, especially for Sarath who had a comfortable lead in the championship. Sarath proved his dominance once again by leaving behind his competition and taking the win in both races to secure his championship title. Sarath was later facilitated by Federation of Motor Sports Club of India (FMSCI) and the Madras Motorsports Club (MMSC) for being the first rider from India to participate in the MotoGP in 2011. He also lifted the championship trophy and celebrated a very successful year at the Indian motorcycle races.

Race engineer Joel Joseph, who built Sarath’s Yamaha R15, was also awarded the Best Tuner Award in his class for building the fastest ever Indian manufactured based bike. This eventually gave Sarath his championship.

With the season coming to an end, Ten10 Racing would like to thank its fans, supporters, and also the sponsors – AGIP Lubricants, Performance Racing Store, DIADEM, KBC Helmets, and Planetsurf Creations.

Please continue to extend your support to our 2011 MotoGP 125cc venture and also at the INMRC.