SARATH CROSSED THE FINISHING LINE 24TH, WHAT A PITY FOR FRANCESCO 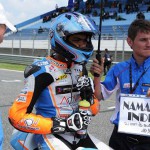 The Grand Prix of Portugal will be remembered for having seen at last, at the third race of the season’s calendar, the debut of the Indian rider Sarath Kumar. To celebrate such an important event, Sarath honoured his mother country, India, by proudly showing on the grid the tricolored Indian flag and the writing “Namaste India”, the typical greeting in his language.

For Sarath the excitement for his first race of the world championship was great. Indeed he is also aware to have focused on him all the eyes and hopes of his entire country, that since the start of this racing venture have welcomed the remarkable step that a humble Chennai lad was going to take.

Aligned together with the world’s best riders on the starting grid from the tenth row, Sarath finished the 23 race laps in 24th position and even though lapped, he did not do any mistake.

Unfortunately Francesco went through a bad day as it did not go on the right way because he had to pull out from the race, after only 8 laps from the start, due to a technical problem – the electronic sensor of the gearbox got spoilt. Despite all, determination is much stronger and even though this time it did not go as wanted, Francesco hopes to do better next time.

“I’m very happy to have completed my first race without crashing. It’s been a bit tough and as I got lapped, I feared to be of obstruction to the riders topping the race. Knowing so, I wisely gave way to the riders that were approaching me and after I continued my race. This is just the beginning and from now on, I have to aim at better results. Anyway I would like to thank my team, my family, the friends, all the supporters, sponsors and in the end to greet my country. They have always been supporting me saying that I could have made it. So this is of great push and encouragement to me.”

“This weekend’s been very odd…..to be forgotten for me. At the start I feared to have to have some problems as I didn’t manage to find the right race set-up. I tried to do whatever I could, but eventually I had to enter the pit box hence my race was over after only a few laps. I couldn’t succeed in finishing the race so rather than risking to damage the engine, I pulled out. I hope to do better in the next race.”