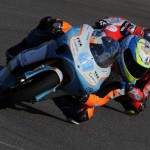 It was not a very good qualifying session for Francesco Mauriello and Sturla Fagerhaug after they finished at 31st (1:47.198) and 29th (1:46.634) positions respectively. Zarco who took the pole position registered a very good time of 1:43.237, which was 82 milliseconds better than the qualifying time that Bradley Smith set last year.

With expected during the race tomorrow, it is expected that the 125 class race may take place without this variable.

“The bike was good but I was not able to make the correct trajectories. Towards the end of the turn I was able to follow more experienced drivers and I improved my lap time a little more. I hope tomorrow to be more effective.”