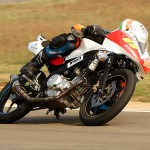 The MMSC-SIDVIN Indian National Motorcycle Racing Championship kicked off from June
1 – June 3 in Coimbatore’s Kari Motor Speedway with as many as 10 categories of
motorcycle racing.

Musli Power – Ten10 Racing participated in the newly introduced 160CC restricted
class (Group C) with four new riders in the team and an all new technical team.
The start was very positive and the performance of the bikes was up to the competition’s
mark.

Expected to be one of the exciting grids of the season, Group C saw no less action
in the first race. Musli Power Ten10 riders blasted off to a great start and spread
across the first group in the first lap, however misfortune struck in turn 5 when
Vinoth Kannan was bumped off the track by another rider. Mathan Kumar took charge
of the race with a brief lead but the young lad from Tiruchi with limited experience
crashed in turn 1, despite an injury to his leg he tried to rejoin the race but
was not able to due to damage to his bike. With two bikes out of the race, Arjun
and Sudhakar managed to cling onto their positions in a competitive race to finish
fifth and sixth respectively and score valuable championship points.

The engineers worked overnight to the get the damaged bikes back in shape for race
two. The bikes were further enhanced and we saw once again a great start by Mathan.
The other Ten10 pilots also managed to get a great start and fight with the top
pack for second position. Vinoth Kannan who was not so lucky in race one managed
to get a great start and move up to second position, Mathan following him closely.
Arjun and Sudhakar managed to settle in the mid pack while Vinoth and Mathan were
fighting for podium position. Sudhakar who had a good race one was not lucky in
race two as he crashed in lap 6. Vinoth in the meanwhile was heading the fight
for second position but crashed in the last lap losing out on a possible podium.
Arjun and Mathan were the points scorers in race two by finishing fourth and fifth
respectively.

Ramji Govindarajan – Team Principle: “Overall a positive weekend; we are a new team
this year having missed out participating in the 2011 championships in India but
we are happy to be back with a good, competitive performance. With three rookie
riders in the class and Vinoth who is vastly experienced the team is well balanced
and is ready for the onslaught of the season. Our bikes are working very well and
now we move to Chennai where the track is different and the weather is hotter. We
need to improve our performance so over the next one month we will work on finer
developments of our bikes and be ready for the next race.”

“We would like to thank our sponsors Musli Power and British Nutritions for supporting
us this year. We would also like to welcome on board our beverage partner Red Bull
and marketing partner Fans on Stands.com. ”

Next race will be held mid July – dates to be announced.