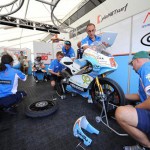 The motorcycle Grand Prix of Japan will be the fifteenth round of the 2011 MotoGP season.
It will take place in the weekend from September 29 to October 2, 2011 at the Motegi circuit.

Francesco Mauriello will not join Sturla Fagerhaug in the WTR Ten10 Racing Team in Japan.
He will be replaced with Luca Fabrizio, the brother of Michel Fabrizio, who has participated in the Superbike.

This is good opportunity for the young rider given by the WTR-Ten10 Racing to showcase his talent to in the MotoGP arena.