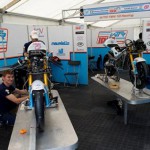 The Circus has arrived in France for the 4th round of the season.

The track is the well-known ‘Le Mans’ circuit; it is capable of evoking memories of races of the past that still sound a reverb in the hearts of motorcycle and motorsport enthusiasts. Geographically 200 km southeast of Paris, the track is historic – by standards of age and reputation.

Inside the original circuit – which traces back to the 20’s – a suitable track for motorbikes was constructed to host the first World Championship in 1969 (with Giacomo Agostini as the unsurprising victor). The current track measures 4,185 meters.

The riders of WTR-Ten10 Team are at the French Grand Prix after a fruitful training in Spain, where they took part in two rounds of the Spanish Road Racing Championship.

The competitive concentration of the riders will be important but will not alleviate the woes related to their commitment since the track they are about to tackle is totally unknown and not an easy confidence builder.

If one were to interpret the signs from the last race, they show clear progress in terms of preparation and experience.

Sarath is eating up the kilometers that are needed to gain confidence in his abilities and Francesco has demonstrated that he has increased his feel for the vehicle in order to adapt the motorcycle to his riding style.