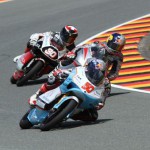 The first race to be held at the circuit was on 26 May 1927 on an 8.7 km layout on public roads, which also ran through the village of Hohenstein-Ernstthal itself. It was dubbed “Sachsenring” in 1937.

The East German motorcycle Grand Prix was held there between 1962 and 1971. The local two-stroke MZ bikes of Zschopau were competitive during this time.

The quickest lap was achieved by 15-time World Champion Giacomo Agostini on an MV Agusta with a 180 km/h average. After West German Dieter Braun won in 1971 and the East German fans sang the West German National Anthem in celebration (as is the case in sport, the winner’s National Anthem is played after the event), the event was limited to East European entrants for political reasons. Since 1998, the German motorcycle Grand Prix moved to the Sachsenring from NÃ¼rburgring.

In recent years, the track has been made faster and longer again, with the length now being 3670 m.

In this context, our two riders are preparing to meet this test – the 9th World Championship of 2011 – which has special significance for the whole team. Sarath Kumar’s place has been taken by Sturla Fagerhaug; despite 2 retirements in 4 of the races that he acted as a substitute for Sarath in, he has proven to be particularly fast has now that he has been appointed Team rider for the rest of the season, he will want to prove his worth.

Francesco Mauriello, who after a considerable few races has settled into a good feeling with his bike, will also try to recall the feeling with the “scoring area” that he still hasn’t “tasted” this year.