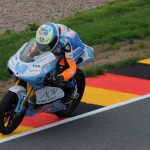 The 11th round of the season will take place in Brno, Czech Republic, which is a crucial race of the season. It is during this time of the season when teams are looking to get new riders for the 2012 season and especially in the lower class, there is a lot of expectation for the Moto 3 Class. This race is also very important for riders to improve their rankings this season. There may be some drastic changes in the standings after this race, but there are many who predict that the 2011 Championship will be decided only in Valencia, which is the last challenge.

The race promises to be exciting, because this is a technical track, which is not very easy to race on. The riders and fans love this track because of the beautiful environment surrounding the track. Though the races here were run around the city from 1930, since 1987 the new track has been the permanent circuit that has not undergone any change from 1996. The track runs in a clockwise direction for a length of 5,403 meters that includes six left and eight right turns, with a straight track of 636 meters.

In the WTR-Ten10 Racing, Sturla knows the track in which he raced last year, but Francesco is new to this track, so the team hopes to put up a good show here.