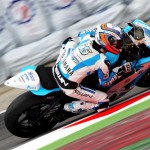 WSS Monza: It was a complicated situation throughout the weekend in Monza due to torrential rains and the schedule had to be amended due to unpredictable conditions.

Late in the fourth round of the WSS after a violent storm and heavy rain on the circuit, the conditions appeared very difficult and precarious for the 35 players. It was a spectacular wet race with many duels on the track and many slips.

Among the less fortunate and forced to withdraw was our driver Cristiano Erbacci in 23rd position who could have finished in the points, but unfortunately had a crash. It was a good race by Massimo Roccoli of Team Bike Service – Ten 10 WTR who finished in a seventh place.

Team Manager, Stefano Morri commented: “A very difficult weekend! After Phillip Island, where Max had fallen, every race weekend was complicated, and it is a shame because the development of the bike has slowed down, but I’am happy with the result today, a day so hard but we brought home a good result, and Maximus again was the best rider on a Yamaha. But for Christiano Erbacci, it was a disappointing race due to the crash, but he has recovered seven positions. It is his first world experience and while world experience counts, it is important to say though that Cristiano has made much progress!”

Bike Service – WTR Ten 10 is excited about the next round of World Supersport next Sunday, May 13th at Donington Park, England.