HAPPY TO BE ON A FULL GRID ONCE AGAIN 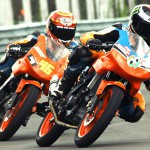 The MMSC-FMSCI Indian National Motorcycle Racing Championship was back in action with Round 2 at Madras Motorsports Race Track (MMRT). After a long summer break the riders and their team gathered at a hot and sultry Sriperambadur Race Track to compete against each other for the prestigious national title.

B-Strong Ten10 Racing, were happy to see and welcome a full grid with almost all the teams coming back to the National Championships after they missed Round 1.

In Round 1, we gave Honda CBR 150 its first top step of the podium but this weekend, the pressure and expectations were higher and the task steeper with all the top teams and racers back on the grid. However the extended summer weather posed a major challenge for all the competitors and machines.

Sarath Kumar riding his newly built Honda CBR 150 struggled for the both pace and balance setups during the practice and qualifying sessions. Surprisingly the lap times were low for all racers when compared to the previous round – guess the change in the rear tyres did the trick.

However despite mechanical, electronic and tyre problems, Sarath #69 managed to qualify in the fourth spot on the grid. The race battle was intense. Sarath had a good start and gained a few places quickly only to fall back when he ran wide off the track at turn 4. From here he had a mammoth task fighting his way back up the grid to finish in 4th place. Meanwhile his teammate Mathana Kumar 46 despite having a fast bike and a good race was unfortunately disqualified due to a regulation oversight on weight.

Race 2 saw a big turnaround with a change in the suspension and better weather conditions on Sunday. After a long spell of rain on Saturday night, the track cooled down. Sarath had a great start once again and took lead in the first lap itself. A hard fought race transpired between Sarath and Jagan with Sarath leading most of the race. But an unexpected coming together of Jagan and Sarath gave Rajini Krishnan the opportunity to take the lead in the penultimate corner and Sarath had to settle for a second position finish. Considering the tough weekend, a second position in Race 2 was welcoming and relieving.

Honda CBR 250 Cup weekend 2 was not great for the team as we managed to salvage only a single third place by Sarath in Race 1. All three motorcycles struggled to find the right suspension setup for the weekend despite having a fast bike. Mathana Kumar 46 crashed out of both races with a huge high-side in Race 2 at turn 1. Yatindra Shirole 18 was on his first outing on a CBR 250 at MMRT and had to work hard to finish the race with a badly handled motorcycle and hot weather.

Overall a weekend to retrospect and come back for a perfect setup for Round 3 on 13 August 2014. The team has identified the problems and is already back to the drawing board to get to back to the preferred setup to attack.