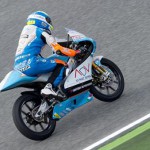 It was a good test for the WTR-Ten10 Racing Team riders at Catalunya as Sturla Fagerhaug and Francesco Mauriello crossed the finish line in 19th and 20th positions respectively. The young Fagerhaug had an excellent race as he proved that he still knows how to compete well in a 125cc race. Though he has not been racing for over seven months now, Fagerhaug has found his touch with the Aprilia RSW of the team, which got the first point at Le Mans.

Fagerhaug started the race really well as he reached the small fast group immediately and thanks to his skillful riding he managed to finish the race at 19th position. This finish has to be considered more than satisfactory taking into account the physical decline due to his long inactivity in the races.

It was also a good race by Mauriello, who has been improving with the experience that he has gained in the races this season. His Aprilia RSW followed his rhythm and the team’s support made the difference once again. After getting a good start, Mauriello had to slow down following an accident involving two other riders ahead of him. Then he gave his best to improve his position before finishing the race at the 20th position.

The motorbike was good at the beginning and then due to change of the weather (wet to sunny) the working of the bike also changed as it lost performance. There is no doubt that the biggest problem was my physical decline due to long inactivity. In Silverstone I will feel better and I think I can get meaningful results.