GOOD RACE FOR FRANCESCO AT INDIANAPOLIS 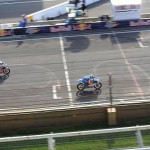 It was a good performance at the Indianapolis GP by Francesco Mauriello, who has been improving with each race in the World Championship. He was riding very well during the race to finish closer to the point’s zone at 18th position in his first race in the United States.

On the other hand, Sturla Fagerhaug seems to have lost his way and with an unusual nervousness, it was difficult for him to finish the race. He once again crashed on the 11th lap widening a little too much and losing the front in an attempt to recover the lost positions. Nico Terol continues to be in a commanding position to win the 125cc Championship this season after taking the victory in Indianapolis.

“I started well, but in the first corner I touched with another rider and lost time, then I started to push too hard and I did my fastest lap of the weekend. Unfortunately, in the middle of the race the rear tyre gave up. It was so unfortunate because I have not been able to force the way like I wanted. Anyway, I am quite happy with this position which is the best of the season, so let’s move on and the points will come. ”

“I started pretty well and I was keeping a good pace that was required to gain some points, in the middle of race I tried to overcome the riders ahead of me to recover some positions, but I forced too hard and I made a right and after I came back few curves, in an attempt to recover the lost time, I crashed. Too bad because today I could have really got a point.”