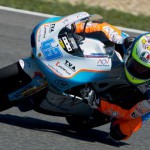 The sky on April 2 was cloudy and temperatures slightly lower than the previous day. The wind was a constant factor, though it’s force was considerably lower.

In the wee hours of the morning on April 2, the third free practice was underway, following which at 1pm was the qualifying practice that would draw up the starting grid of the race on 3rd April. Francesco came in 33rd; unfortunately Sarath failed the qualifying session by less than half a second.

Sarath & Francesco are both young riders who need to gain a lot of experience to grow and so, it still will be necessary to spend a lot of time on track. Despite the apparent lows recently, they have been consistently improving.
Particularly Francesco, who performed better in the free practice session in the morning by clocking 1’53.840 – 2.57 seconds faster than the lap time clocked in the qualifier, during which he had a little bit of a hard time, which could have been due to a problem with the tyres, other than the necessity of gaining intimate knowledge of the bike’s characteristics.

Although Sarath keeps improving, at the moment he has not been able to overcome the 107% rule for qualifying. Nonetheless, Sarath is not too far away from his target and very soon, he will be able to hit it as the gap is negligible.

Francesco Mauriello, 1’54.097, 33rd:
“The most important thing is to be qualified, even though the result achieved is not what I would have expected. I really like this track and in the morning I lapped quite well; in the afternoon I was even hoping to do better. But I had some troubles as I don’t know the bike very well yet; then also the choice of tyres has been hard and I didn’t feel comfortable. In fact I didn’t manage to improve so little by little, I slipped down in the ranking as far as reaching the last position.
Anyway I’m still positive and confident that tomorrow I’ll do well for the race.”

Sarath Kumar, 1’55.366, not qualified:
“I was so confident to getting qualified that I believed on it till the end; unfortunately it’s been the last few minutes of the qualifying practice to shatter my belief. The bike was perfect and the setting adopted was set in a way to help me; I tried to push to the point that I even crashed at 7 minutes from the practice end. However I promptly picked up my bike and got back on track, joining a group in order to have some reference points to follow. Unfortunately I didn’t succeed this time either; it seems the same situation I experienced in the first grand prix in Doha.
I’m really sorry, but at the same time this motivates me to do much better for whoever believes in me, for myself but especially for my Team that supports me and helps me heaps.”
CALENDAR – 2013