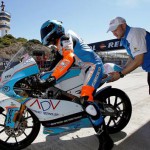 The weekend was brightened by the hot sun with the nearly summery temperatures, although rain was forecasted on the race day. The warm-up session held the early morning hours was speckled with rain, and the riders had contend with the wet asphalt .

The rains and the subsequent wet track didn’t prove to be much of a deterrent for Francesco as he’s seemed to be a fan of slippery tracks since the beginning of his career. Racing in rainy conditions is a unique experience and there are no half-measures to it; you either like it or not. Francesco appear to be a man with tastes toward the former. In fact, during the warm up, the young Italian Rider ranked remarkably well for an extended period, until reaching the 8th best time.

In the race, starting at the 11th row, nobody expected it to be an easy task but Francesco confirmed his skills by attaining a good start and racing up several positions. When he was 23rd, keeping good pace close to a small group of riders, he was not too far away from the scoring area. Unfortunately his steady move up the ranks stopped after lapping half race session. In an attempt to moving up a position he crashed out in the corner that lead to the finishing straight; a notoriously tricky corner.

The crash was unfortunate as the race would have ended in a good time score for Francesco. Despite being unable to cross the finishing line, the result achieved is still significant because Francesco has proved to have character and to be able to compete with riders more experienced than him.

Francesco Mauriello, 26’24.778, not classified:
“The day began very well: in the warm up I lapped in 18th position on wet. But at the race start, I didn’t start as I wished”¦it’s not been one of my best starts. However I still moved up of several positions. At 7 laps from the end, in the attempt of catching up I tried to open the throttle earlier than the Rider I was chasing, but I lost the rear and unfortunately I crashed out.
After all I think that today has been pretty good in spite of all. I will be waiting for the next race in Estoril to do better.”