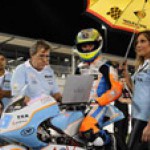 The floodlights have been kept on since the afternoon to ensure perfect artificial lighting for today’s night race, that was made more suggestive by the starry sky brightened up by the full Moon. The weather conditions have been great for the whole weekend, which have contributed to the good conduction of the race.

The MotoGP Championship sees as protagonists the world’s best Riders. Being now part of the 125cc class, Francesco has just started his adventure into the championship with the aim of becoming a champion. Today he fought with strong and more experienced riders than him that are in the championship since years. Although Francesco is less experienced, he has not disappointed the expectations. With resolution and consistent progress, shown throughout the weekend and during the race as well, he ended his performance reaching the finish line 27th. A collision that he had with another rider made him lose the positions gained thanks to the good start, but after all, resuming from the bottom, he maintained the focus and eventually finishing his first race of the season.

His team mate Sarath could not race as he did not qualify, had anyhow participated with his heart to what would have been the first race of his career for him as well. With great sporting spirit, Sarath supported his mate’s race first by taking him on the starting grid and then, congratulating him for the race performance giving a tight handshake. In moments like this motorcycling proves to be a loyal sport spurred on by a strong team spirit.

As the Grand Prix of Qatar has just come to the end, the next date is scheduled in two weeks time in Spain, where the team will get down on track again at Jerez.

“For being my first experience in the world championship, the race’s been good. I made a good start but in the first corner, after colliding with someone else I had to resume from the bottom. Later I caught up of a few positions, reaching the finish line 27th. As impressions on my first race, I realize that I still need to make a lot of experience; the other Riders are seriously strong and fast. Overall I am happy and I’ll be waiting for Jerez to do much better”.