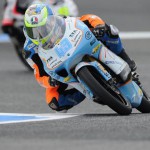 The first free practice took place today at Motorland in Alcaniz, which boasts a 5,077 km long track that was completed in 2008. The circuit is set to host a MotoGP World Championship race as well as a host of sporting events, including the Spanish Road Racing Championship – better known as Buckler CEV.

Next Sunday, the second round of this competitive championship will be held right here; it can be considered a hardcore training experience for future Champions.
The two star riders from the WTR-Ten10 Racing Team are part of this adventure with the most current, popular riders in order to have the opportunity to be on track for extended lengths so as to enhance their feel for the racing bikes.

Francesco Mauriello’s performance – 2:06,100 for the first practices of this morning and 2:07,0 in the afternoon (a strong wind got up!) – was not bad; the Italian rider has now experienced a circuit that is well-known for being as technical as it is spectacular.

There were some problems for Sarath Kumar this morning (2:14,800) and better in the afternoon (2:10,600); the right setting for his bike has still eluded him – that settled feeling that should help him gain confidence on track.

The best riders in the Spanish Championship have made it in about 2:04,000.