Against All Odds
By Pooja Dabhi 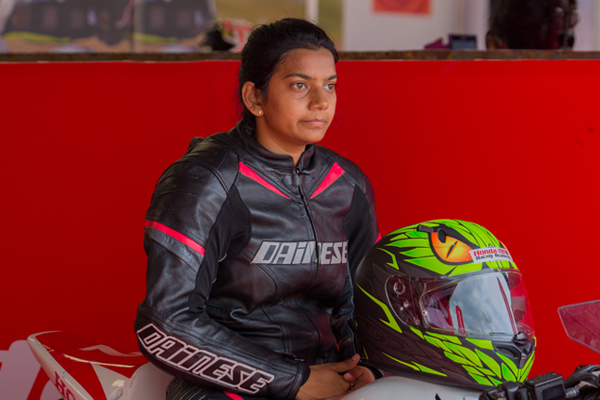 Two years ago, in 2014, I was a student of architecture, travelling 70 kms every day going back and forth to college. My mode of transport was usually my little moped. Actually if it had not been for that moped, and its limited capacity, I may never have discovered the art of motorcycle riding. As it was, my moped could not clock very much mileage, and would die out after about 350 kms. And it was then that a friend introduced me to the real thing.

In November 2014, it was a KTM Duke 200cc that had me at “hello”. It belonged to a friend of mine who taught me how to ride. Within a month I had bought the same bike and it was the best thing that happened to me.

I had always been something of a lone traveller and have travelled to various parts of India by myself, with just my backpack for company. With the addition of my bike to my life, riding became my passion and I have enjoyed several rides in and around Maharashtra. I began with short trips that were about 300 kms within the State, and then started rides that lasted days.

In March 2015, my attention was drawn to the KTM Orange Day, Pune. That was my first race ever. I can’t say what made me go or think I could race, but I just liked the idea of giving it a go, so I did! It was very, very hard. I was the only female rider and was quite lost in the dust, but it was an eye-opener and the thrill of speed was something completely new and thrilling to me. In September 2015, KTM organised a second Orange Day, and of course I went for that one too. Although both times I didn’t make the podium, I enjoyed the thrill of the race and felt a freedom like I had never felt before. It was no surprise that my riding and racing a bike was not well received by my family. It was, and still is, very hard for them to conceive of motorcycle racing as a career for their daughter. They would have loved it had I completed my architectural degree, taken up a job somewhere and lived the safe, predictable lifestyle that most of my peer group has. It isn’t as though I haven’t considered it – I have. It is a challenge every Indian woman faces. Safety and security is what every woman is forced to take into consideration.

As far as motorcycle racing goes, people need to debunk the notion that biking is just for men. I believe women are more dedicated than men. I know I am. I feel biking has made me a better person. Just having a bike enabled me to do all kinds of odd jobs, I found my independence and wanted to do everything by myself. Now I only ever think – I will do it myself, without anyone’s help, and am ready to travel to any alien land or stay at some random village with just my tent and bike by my side. Enjoying 1400 kms on my bike all alone just to constantly break my own record has brought me so far in life. Today, my confidence is at its peak, and wherever I hear someone talking about adventure, I get in line.

In early 2016 I saw the announcement of the Ten10 Racing Academy – Women’s Only Batch. Since I had never properly been trained before, I decided I would give it a try.

When riding on my own, around the country, especially in the various Ghat sections, I found that cornering was my big challenge. I had this urge to conquer this skill that would enable me to ride through the Ghats and accomplish all the turns and twists with ease. I hoped that the Academy would help me figure that out while also giving me the opportunity to ride on a track and race again.

Riding at the Ten10 Racing Academy was a fantastic decision. I learnt more than I could have hoped for. Subsequently, I participated in an all-women’s race that they organised – this was the first time I had raced against other women riders. It was a very different and new experience for me. I started out leading the race in pole position but dropped back to second at the end of the race. Still, a podium finish was fantastic for me, and all the attention I received then made racing a reality. After all the media attention and interviews, I went home with a trophy, and then, finally I began to see a change in my parents’ attitude towards my decision to race.

I have ridden four races since then and each time I have finished on the podium – two first places and two second places. I have had the best times of my life on the track, both at Chennai and Coimbatore. I think one of my favourite moments was when I was racing with my friend Shruti earlier this year in Coimbatore! Racing has made me some new friends in addition to giving me new goals and ambitions.

Far from being a conformist living the safe and approved life of the average Indian woman, I feel I have a come a long way and now, at 24, I am excited at the prospect of a career ahead in racing. With many more strong performances, I hope to soon be closer to my goal. In the near future I will race against men too and see how I compare with some of the best.
It is important to remember, though, that winning is not everything. Even crashes, missing podiums and trophies teach you lessons. In racing, no one is perfect. Every rider is in a constant state of learning. Learning is the key.

To my fellow women riders out there, I want to say: It is important to believe in yourself no matter what size, shape or age you are. To change your life for the better you need to make the change in yourself first. Secondly, get a bike and live your life, fulfil all you dreams!

I felt proud and humbled as I watched our Indian girls at the Rio Olympics make their mark on the world. If it is my destiny to shine in the world of motorcycle racing, I hope someday I too will make my country proud.