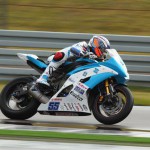 Unfortunately for Team Bike Service – WTR Ten10 the rain was to decide the fate of the day, completely washing out all the plans that the team and Massimo Roccoli had. Only after a few laps, he had to raise the white flag. The race was won by Lorenzo Lanzi, Kenan Sofuoglu came second and in third was Vladimir Leonov.

However, the win means nothing because of the rain playing havoc and almost immediately after the start as many as 14 riders were forced to withdraw.

“Too bad for the race!” Says Stephen Morrison. “On this weekend we were fast and improving. Most of this morningâ€™s warm up had recorded the second best time. Unfortunately, today the sun and rain alternated, the weather was very unstable and the choice of tyres that we took did not proved successful. ”
The next round of the World SuperSport will be on 4, 5 and 6 May in Monza.