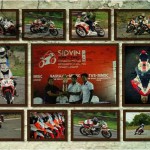 A well planned and executed week helped us seal the closely fought new championship in the Indian 165CC restricted class.

All the hard work by the team through the week to give Sarath Kumar a good package paid off. Sarath #69 went on the win both the races of the weekend with a huge margin and also setting up new lap record for this new class.

Mathana Kumar #46 managed to secure a third place podium in Race 1 to wrap his season in his best.

M. Sudhakar #12 had troubles right through the weekend but managed to have a good race despite a problem with his motorcycle.

EB Arjun #77 had a difficult and unlucky weekend.

In the Honda CBR 250 Cup, B-Strong supported CBR 250R ridden by Sarath #69 clinched the team Championship Runner-up title. Although Sarath joined the season late in this class he managed to clinch the 2nd Runner-Up Championship.

But over all, end of a racing season always brings a smile on everyones face for a great season and team work.

We are grateful and the whole team would like to thank our Title Sponsor, Musli Power by Kunnath Pharmaceuticals and B-Strong Academy who came forward to support our team. We look forward for their support in the future also.

Ramji Govindarajan – “An overall satisfying season although a couple of low performance during the 3rd and 4th round but we had put together a plan to come right back where we belong, on top. The team stuck together and managed to pull of the season despite limited access to funds. I thank everyone for their support including our fans, sponsors, and the organisers, official & marshals.”

With the season complete we are already looking forward for the 2013 season. For now we sign off for 2012 and wish everyone a Merry Christmas & a Happy New Year.

Note: Wear a helmet when you ride a motorcycle, slow or fast.