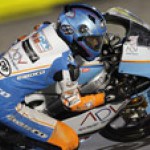 Bangalore-based Ten10 Racing Team has joined hands with the Sammarinese WTR Team to enter the world of MotoGP in the 125cc class for 2011 MotoGP season
Finally the time has come for Indian two-wheel motorsport fans to rejoice as Indian teams prepare to make their foray into the world of MotoGP ? premier motorcycle racing championship in the world. While Mahindra?s plans to get into the 125cc class of MotoGP have been confirmed, there is another outfit from Bangalore, Ten10 Racing that has tied up with the San Marino-based WTR Team for a provisional entry in the 125cc class. The joint venture will be called WTR-Ten10 Racing Team. The team will be fielding two riders, one Indian and one Italian. This will be the first time that an Indian rider will make it to the MotoGP grid and it will indeed be a moment of pride for all the country.

These developments mark India?s entry onto the global motorcycle motorsport and it comes at the right time as the country prepares to hold its first motorcycle GP in 2012 at the Jaypee Circuit in Greater Noida. The contract includes a 3-year deal of technical-commercial partnership between the two teams that commences from 2011 wherein the two riders will globally represent their respective nations ? India and Italy. The team will be renamed as “WTR-Ten10 Racing Team”, a wanted choice aimed at representing the strong cohesion of the partnership: passion for the sport, same principles, ambitions and future growth expectations are the values commonly shared together.

Besides entry into the 125cc class, both the teams will continue to race in the upcoming Moto3 class for 2012 and also look at getting into the Moto2 category in due course of time. Castellucci L., WTR Team?s principal: ?I am extremely happy of the agreement reached with Ten10 Racing. Our cooperation is the realization of a very important project that gives us also the opportunity to participate to the World Championship with a young talented Indian rider, event that has no record in the history of world motorcycling. At completion of the team formation a well-known young Italian rider as well. All this has been made possible thanks to Ten10 Racing that passionately believes in the sport and its strong communicative value as much as we do. I heartily thank Ten10 Racing?s principal for believing in us, hence the passion and commitment poured in our project, the same feelings that have been distinguishing WTR Team since its birth.”