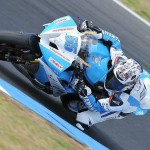 We are at Phillip Island, in the region of Victoria, 120 km, southeast of Melbourne. The circuit, built in 1956, has been hosting races since 1997 and has become a meeting point for the WSS, marking the start of the season.

The island is reached by a bridge which connects the mainland. Phillip Island is famous for its beaches and wildlife. At sunset you can watch a unique show called “Penguin Parade” as little blue penguins coming out of the ocean return to their nests in the ground where they spend the night. They are the main attraction of the island that has among its jewels living koalas, kangaroos and emus.

The track is beautiful and spectacular. A succession of counterclockwise fast corners and long straights (7 left and 5 right) with a total length of 4445 meters. In between two hairpins made specifically to inspire desperate, daring overtaking. The track is close to the sea, making it beautiful and very popular with photographers.

We are in the 25th year of this beautiful World Championship. This year is expected to be particularly well fought. 32 registered drivers from 23 countries will compete for the championship title in 13 rounds. Bike Service – WTR Ten 10 is ready to take up the challenge and will rely on the added value of Massimo Roccoli who is at the peak of his career.

Concluded a few hours ago, the official testing of SuperSport, like every year is right on track at Phillip Island – one week before the debut season. Massimo Roccoli and his Bike Service – WTR Ten 10 team have done their work (in these two days of rehearsal), to the best of expectations. In fact the team (and especially the driver), had to deal with a bad crash of Roccoli, the lone rider. He slid, and fell at 180 mph, at the end of a fast corner, causing major abrasions on his thigh and arm.

However, despite the fall Massimo Roccoli finished with the 12th highest lap time overall and at the end of the test session finished16th highest overall.