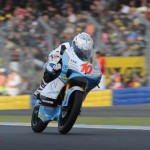 The most important news is the absence of Sarath Kumar who had announced his wtidrawal from the MotoGP at the French Grand Prix. Sarath appears to be suffering aftereffects of the crash reported in the Spanish Championship (CEV) race held last weekend at Aragon. To replace the young Indian rider, the team has called upon the services of Frenchman Alexis Masbou, darling of the local public. Despite being only 23 years old, Alexis has extensive experience – as many as 81 Grand Prix starts in six seasons, beginning in 2003.

This year, he returned to race in the French Championship, starting an apprenticeship in the 600cc Stock class, 4-stroke. Despite many months of absence, Alexis has now shown not to have forgotten how to master his 125 cc class. With professionalism and experience, he has adapted to the bike’s needs and its driving characteristics. The short time available, however, was enough to get the 19th place on the grid – 2.65 seconds behind pole holder Nicolas Terol.

Francesco Mauriello showed good progress and drove well without making mistakes, thanks to the experience he gained in the Spanish Championship race in Aragon, which he participated in during the break from the Championship. He obtained a satisfactory setting suited to his riding style and won the 25th place in the grid, pulling in less than 4 seconds behind pole position.

“I’m glad of the opportunity to return, even if for only a race in the world 125cc class. I also found my chief engineer of two years ago, with whom he had tied considerably. We worked on set-up and improved a lot since yesterday. Tomorrow I will give my best efforts and I hope to do well. ”

I am happy how things are made after the race in Aragon in the Spanish Championship. There we realized of the problem that had afflicts us, and we have resolved. The bike is still very strong and the bike is now like I wanted it. I think I have good cards to the race tomorrow and I hope to do well.