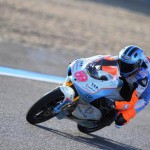 The WTR-Ten10 Racing Team aims to quickly improve the skills of their two young riders and for this reason Sarath and Francesco have left for the circuit of Aragon, where the second round of the Buckler CEV 2011 Spanish Championship will be held this weekend.

Just after the World Championship race at Estoril, where both riders were on the starting grid, for the first time, the Team reunited at Alcaniz in the amazing circuit of Aragon.

This participation in CEV is necessary for Francesco and Sarath to cover more distance on the World Championship tracks with high-level riders like the ones taking part in the Spanish Championship.

Aragon is also a modern and beautiful circuit with its ups and downs, curves and straights that put a strain on both teams and riders.