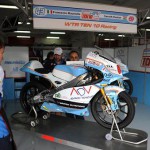 The sixth race of the season will be held in United Kingdom at the Silverstone Circuit, which hosted the World Championship in 2010. From 1987 to 2009, the British Grand Prix was held at the Donington Park. Silverstone is the temple of Formula One in this part of the world and it is on this track, which was primarily a former military airport, the first race of the Formula One World Championship was held in 1950.

The circuit was originally built by connecting the three runways before it was reconstructed in 2010, so it is not very familiar to most of the riders. With three straights, the longest measuring 800 meters, Silverstone is one of the fastest circuits with a total length of 5,902 meters.

The WTR-Ten10 Racing Team is getting ready for this race with Francesco Mauriello, who is improving with each race and Sturla Fagerhaug, who was reappointed after a good performance in Barcelona.