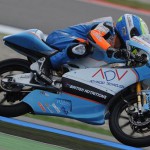 Francesco crashed at the beginning of the turn as he arrived at the garage, and his sturdy machine was literally rebuilt by mechanics in record time, allowing the rider to go back on track before the end of the turn. But not for long! Francesco sensed that something was amiss with the rear; he had punctured the rear tire! At that point, sadly, he was forced to come back. However, despite not having a time within 107% rule, the commissioners decided that he could start in the GP considering the odd circumstances that he had to endure and the team’s readiness in the face of these circumstances.

# 43 Francesco Mauriello 1’st 57, 548
“Today qualifications are coming from a bad day! I crashed right at the beginning of the turn but I managed to bring the motorbike to the garage despite tough conditions. The mechanics were able to perform a miracle, with a lot of work, in sending me back to the track … But as I left, I realized that the rear wheel of the motorbike was moving and that I had punctured the tire. A real shame, because the motorbike was perfect!”.

Sturla Fagerhaug # 50 1’st 47, 438 -17th place in grid
“Today I faced a little difficulty with the the track since it was a combination of wet and dry … But the motorbike was running very well. It was a real pity that I could not find the right feeling with the track because I think I could do better than the 17th place in grid. However I am sure that, with a good start, I could give a my contenders a hard time.”