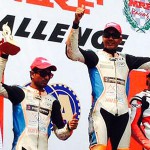 The team ran a Honda CBR 150 which was Sarath’s first outing on the CBR 150 and also a Yamaha R15 ridden by Mathan. Mathan has been working on his riding style and pace and it is a crucial year for him to move up the ladder especially after a spectacular year in the one make last season. Sarath on the other hand who ended the 2013 season by winning the Honda CBR 250 had regained his confidence and composure after a tough 2013 with many up and downs including a crash that required surgery.

The grid itself, despite many teams missing in action, had sufficient motorcycles which were competitive enough to provide an exciting race. Sarath and Mathan qualified 1 & 2 respectively with Mathan clocking his personal best.

Race 1: Sarath took an early lead in Race 1 and it was a close battle between Jagan of TVS Racing, Sarath and Mathan. Sarath managed to pip Jagan in the third lap with the perfectly setup Honda CBR 150 doing what it was supposed to do. Sarath took the chequered flag with a comfortable lead with Mathan and finish third; a good start for the young lad.

Race 2: The race had an eventful start with Jagan of TVS Racing having a deflated rear tyre on the starting grid and Sarath experiencing a technical glitch in the warm-up lap. Both the riders managed to start the race, however Sarath’s technical glitch continued and he had to retire in the penultimate lap. Mathan kept the team’s flag flying high with a great fight for the first position right through race. He managed to finish second, his career best in the class with the fastest lap time of the race which proved a great confidence boost despite the team losing Sarath.

Overall a great start to the season with much excitement on the track and off among the spectators.

Round 2 is a three months away in Coimbatore in June. Until then, the excitement moves to the Buddh International Circuit, Noida on 22-23 March 2014 for the One Make Championship in which Ten10 Racing will participate with three riders.