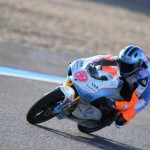 The streets of the Paddock and the viewing areas are getting more and more populated by people, who have come to attend the Grand Prix Bwin of Spain that traditionally is the championship’s event that registers among
the highest percentage of attendance. All through its 4.4 km of length, the circuit of Jerez De La Frontera has got technical characteristics that make it a very fast and challenging track.

Our Riders faced the free practice session on the Spanish track with serenity and confidence. The air was hot and the Sun hit hard as the ground temperature went from 19° degrees in the morning session to 38° degrees in the afternoon second practice. There was only one problem though, the strong and annoying wind caused problems to the Riders stability.

Indeed, it was the wind that caused only a few minutes from the session’s end and a lap
before the last one and made him lose the front by being pushed out the line. The same air blast, other than Sarath involved other two Riders that were following him as well, fortunately without causing physical injuries to none of them.

Francesco, in the first practice session, had to face an electric problem that limited him to run only 6 laps but in the following session after finding the right feeling with the bike and with the cycling set-up improved, he could end with a more satisfying performance. Francesco is assimilating the information processed with the Team’s support, taking important steps forward in his growth.

Francesco Mauriello, FP1 2’03.053, FP2 1’54.979:
“In the first session, we didn’t qualify due to an electric problem that took time to be fixed. However after having found a better cycling set-up than the one in Doha, in the second free practice we did better as we lowered the lap time getting back in the ranking.
I have to find better trajectories, especially when exiting the corners, that allow me more acceleration. For this purpose, in the afternoon I plan to check the track out in order to mend in some spots.”

Sarath Kumar, FP1 1’56.260, FP2 1’56.430:
â€œToday went well although I didn’t get in the ranking for only one tenth exactly on the second last lap of the second session. At the end, while I was improving my timing, I crashed due to the strong wind that made me
lose the front on the fast second last corner.
Anyway it’s still okay, afterall today was the free practice; but tomorrow it’s a different thing and I do am confident
to be able to qualify."